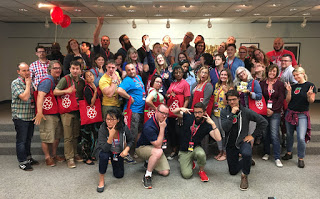 Ms. Simmons is a Co-Lab member and teacher at Moline Coal-Valley Schools

From July 24-25, I attended Raspberry Pi’s Picademy in downtown Ann Arbor. For those of
you who are unfamiliar with Raspberry Pi, it is a $35 ‘mini computer’ that can be hooked onto a desktop as a computer replacement or can be used for coding projects and inventions. Picademy is a Raspberry Pi training session for educators that you have to apply and be accepted for. I found out at my training that there were over 1000 applications for Picademy training, which means that not everyone was accepted. As a music teacher, I was even more surprised that I was accepted. 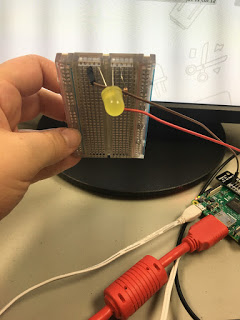 Before my time at Picademy, my experience with Raspberry Pi was limited. I was using it mostly as a desktop computer and I would follow the directions on how to program Python into Minecraft. One of my administrators saw the value in Raspberry Pi, especially with it having Minecraft as part of the software, and purchased some for our students to use. During my summer 3D Printing Boot Camps, I would have students play Minecraft while they waited for prints. Even thought Minecraft can be fun, I did not have any experience doing any sort of physical computing with the device, even though I purchased a breadboard and LEDs in hopes that one day I finally would sit down and ‘figure it out’.

Then I went to Picademy in Ann Arbor and learned ALL THE THINGS! I actually made an LED light blink on the breadboard- something I was too intimidated to do before. We then moved on to making cameras and taking selfies (which were photobombed by our friendly staff), and making emojis with an LED Sense Hat. As someone who likes lots of color, I was very impressed with the sense hat and can probably spend all day doing color combinations and messages with it. We also used an Explorer Hat to operate a wheel, which can bridge into robotics, and some music coding with Sonic Pi. As a music educator and tech enthusiast, I hope to implement Sonic Pi into my own classrooms (trying to make an electronic music lab). 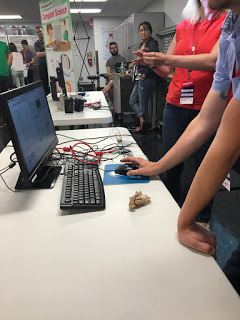 Besides the fun in making all of these projects, I met some really positive educators that were very enthusiastic and passionate about Raspberry Pi. For Day Two, I was in a group project in which one of our members, Kelly, had an idea to make a mood ring not only display the color that you were feeling, but to also play the music that corresponds to each feeling. In our group of six, we had two people work on each part of our project: the temperature sensor, the sense hat pixels, and getting music into Python. No surprise, I worked on putting music into Python.

AND IT WAS DIFFICULT!

Our instructors told us that failure was going to happen and that it should be embraced, but I failed so much in two hours trying to get the music from my MacBook to the Pi, and into Python. My coding-partner-in-crime, Emily, and I searched GitHub for all sorts of code trying to get our music into Python and we were unsure if we could pull it off by the time we needed to present- but with about a half hour to go we had the code needed and finally put together all three components to present to our colleagues. I wish I had taken a video, but I do have a picture of the project. 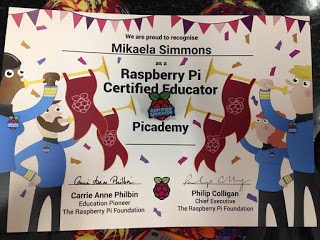 At the end of Picademy I was so excited to drive back home for six hours and get started on tinkering with Raspberry Pi, and I have had some success making a sense hat emulator sparkle and tried to do a RetroPie video game emulator that I eventually wasn’t happy with and restored my Pi to its natural state. I have some plans for my Girls Tech Clubs this year on the Raspberry Pi and am excited to see what they come up with.

In closing, I highly recommend teachers to apply for Picademy. The Raspberry Pi is super affordable and the opportunities are endless. There is so much support out there and if one is a little intimidated, Picademy would boost their confidence. The staff was wonderful and fun, and everyone in the room has a common goal- to learn how to use these tools in order to teach successful students.