We came, we saw, we rocked it!

We were very well represented by Jacob Burkamper, Keith Claussen, Chris Cooper, David Hinkle, Phil Haubrich, Mark Kruse, Cody Wilson and Ben Ziegler as they managed the exhibits, chatted with show visitors, and made sure everyone was safe while experiments were exhibited.

Our display was the largest at the show, taking up a total of four tables. Quadcopters, the Rubens’ Tube, Van Der Graff Generator, Jacob’s Ladder, POV machine, and the Liquid Nitrogen (LN2) demonstrations were the life of the Faire. There was so much we wanted to show, it took three vehicles to transport all the gear.

Quad Coper flights by David Hinkle thrilled spectators as the high-tech remote-controlled craft hovered in the air while streaming live video back to our booth several yards away. Chris Cooper’s LN2 demonstrations dazzled the dozens of show visitors who gathered around to see how superconductors react, pound nails into wood with a ‘banana hammer,’ shattered a racquet ball and served freeze-dried marshmallows to those brave enough to try.

In between shows, Chris had the opportunity to venture outside and attempt to make contact with the International Space Station as it passed by overhead. He used a DIY Yagi antenna hooked up to an APRS enabled handheld radio that operates in the amateur radio spectrum. With some help from Mark Kruse to locate the flightpath, they were successful in doing so.

There were a couple of unfortunate situations we had to overcome. The Co-Labulance developed a coolant leak we were unable to resolve in time for the road trip. After operating briefly, the Rubens’ Tube demonstration fell victim to venue regulations, so the propane tanks were removed and the Rubens’ Tube became a static display.

Despite the setbacks, it was still a great show and everyone had lots of fun. Norah Hammond, General Manager and Education Director, Cedar Rapids Science Center and Mini-Maker Faire organizer, was thrilled with our efforts. We have already been invited back for next year! 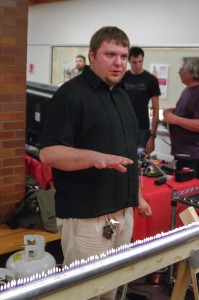 So, hats off to everyone that helped out getting things ready, made the trip to visit us, or presented because it was definitely a CO-LABorative effort to make it all happen. 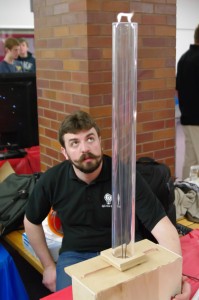